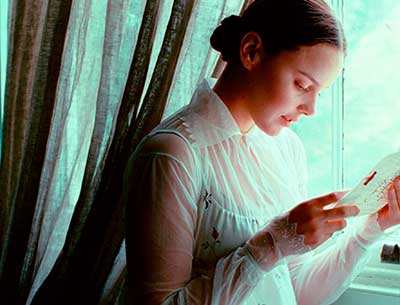 With a special introduction by Heather Cole, Assistant Curator of Modern Books and Manuscripts and Curator of the Theodore Roosevelt Collection from Houghton Library.

The yearning spirit of the English Romantic poets infuses this biopic of John Keats (1795-1821), which focuses on his love affair with Fanny Brawne. Jane Campion has given repeated proof of her ability to bring the 19th century to the screen without resorting to cliché, and the soulful exchanges between Keats and Brawne—he gives her passion, she gives him depth—are audaciously felt.

Of the 126 poetry manuscripts that survive in John Keats’ hand, ninety-one are part of the Keats Collection at Houghton Library. Of the 251 letters by Keats that are known, eighty-six in his hand are held by Houghton, along with another twenty-four letters in contemporary transcripts of now-lost originals, making the library’s Keats Collection the single largest repository for the poet’s letters. Among the original letters in the collection are thirteen to Fanny Brawne, written in 1819 and 1820, their content being in large part the basis for Bright Star. Most of these letters come from two donors: the poet Amy Lowell, who bequeathed her famous Keats collection to Harvard in 1925, and Arthur A. Houghton Jr., Harvard Class of 1929, who gave Harvard his spectacular Keats holdings, as well as the special room and the library that now house them. Also in the collection is a contemporary transcript, made by a close friend, of Keats’ sonnet written for Fanny Brawne, which begins “Bright Star, would I were stedfast as thou art.”

Gaze upon the Keats life mask before watching Bright Star. The Keats Room at Houghton Library will be open to the public for a special pre-movie viewing from 5.45pm to 6:45pm. Learn about Houghton Library’s Keats Collection from Leslie Morris, Curator of Modern Books and Manuscripts. The library is located across the street from the Harvard Film Archive.

Your ticket for the: Houghton at 75 Film Series, Harvard Film Archive: Bright Star (2009)