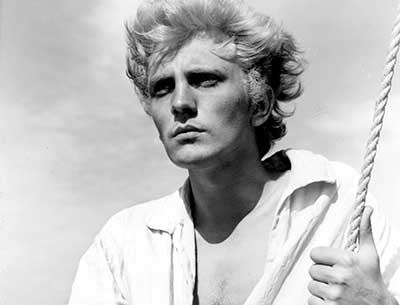 With a special introduction by Dennis Marnon, Administrative Officer at Houghton Library.

Actor Peter Ustinov directed, produced, starred in, and adapted from a Broadway play this version of Herman Melville’s tale of treachery in the eighteenth-century British navy. Using a great deal of dialogue from the book, Ustinov maintains the ambiguity at the heart of Melville’s allegory about the constant tension between justice and the law, particularly under military pressure. Like many films directed by actors, Billy Budd owes a great deal of its impact to its performances. The angelic Billy is played by a blond Terence Stamp in his film debut, while Ustinov himself is man o’ war Captain Vere, forced to try the naïve Billy for the accidental murder of evil master-at-arms Claggart, played with staggering authority by Robert Ryan, who had long coveted the role.

Herman Melville (b. 1819) worked on the composition of Billy Budd from 1886 until his death in 1891. The manuscript was preserved in the family for decades (in a tin breadbox, according to family tradition) until it was edited for publication in 1924 in the Constable edition of the Works of Herman Melville. Written in obscurity, considered unfinished by his widow, and left unpublished for thirty-three years, Billy Budd is now regarded as a masterpiece and holds a place second only to Moby-Dick in the Melville canon. The manuscript, along with other Melville literary papers, publishing agreements, letters, journals and family papers, was placed on deposit at Harvard in the early 1930s by Melville’s granddaughter and literary executrix, Eleanor Melville Metcalf, and then given by her in 1937. In 1942, the year Houghton Library opened, Mrs. Metcalf made an additional gift of more than 100 books from Melville’s library, inscribed copies of his own works, corrected proof-sheets of several works, and presentation copies of the works of other authors. The Melville collection at Houghton Library is the richest and most varied resource for the study of this American author.

Your ticket for the: Houghton at 75 Film Series, Harvard Film Archive: Billy Budd (1962)