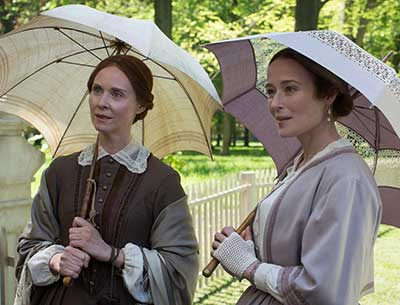 Director Terence Davies in Person; with a special introduction by Leslie Morris, Curator of Modern Books and Manuscripts at Houghton Library.

Continuing his ongoing series of films about women confronting the constricted place allowed them in the 19th and early 20th centuries (after The House of Mirth and Sunset Song), Terence Davies presents his most unconventional protagonist yet in this biopic of the poet Emily Dickinson (1830-1886), which spans her life from adolescence to death. Davies, always attuned to the rich inner lives of solitary figures, presents Dickinson without any veneer of charm or pity but rather as an artist of striking originality and indomitable strength.

In May 1950, Gilbert Montague, Harvard Class of 1901, gave to Houghton Library, in memory of his wife, the Emily Dickinson Collection of papers and artifacts that had been passed down through the poet’s immediate family. The collection includes autographed poems, letters, family papers, and the family library. A special room on the second floor of the library is furnished with family portraits, Emily Dickinson’s square piano, other Dickinson homestead furniture, and the chair and desk from her bedroom, where Dickinson wrote her poetry.

See the desk where Dickinson wrote her poems before watching A Quiet Passion. The Emily Dickinson Room at Houghton Library will be open to the public for a special pre-movie viewing from 5.45pm to 6:45pm. Learn about Houghton Library’s Dickinson Collection from Heather Cole, Assistant Curator of Modern Books and Manuscripts. The library is located across the street from the Harvard Film Archive.

Your ticket for the: Houghton at 75 Film Series, Harvard Film Archive: A Quiet Passion (2016)