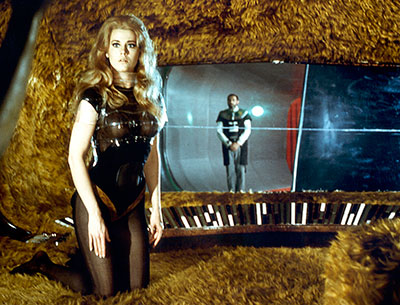 Harvard Film Archive, October 28
As the final piece in the Harvard Film Archives’s tribute to Houghton Library on the occasion of the 75th anniversary of its founding, the HFA and library present Barbarella and Monkey on My Back, two very special films that typify the spirit of Houghton’s major fall exhibition Altered States: Sex, Drugs, and Transcendence in the Ludlow-Santo Domingo Library. The exhibition will be open for a special pre-screening viewing from 5:45 to 6:45pm, and both films will be introduced by the exhibition’s curator Leslie A. Morris, Curator of Modern Books and Manuscripts, Houghton Library.

Based on Jean-Claude Forest’s adult French comic, Barbarella giddily imagines a pop, flower-powered space age where sexuality isn’t considered prurient or even provocative. Campy and over-the-top in every respect—from the catchy, loungey TV-era theme song to its surreal and oversexed imagery reminiscent of Italian Gothic horror films, Barbarella is both an idealistic and cynical view of modern culture, but does not seem to take itself very seriously despite director Vadim’s declaration that star Jane Fonda would not “be a science fiction character, nor will she play Barbarella tongue in cheek. She is just a lovely, average girl with a terrific space record and a lovely body.” Barbarella remains incorruptible even as she awakens to her primary power—sex—and the concept of evil. She is flexible though, sometimes fighting fire with fire, but does so with a positive resourcefulness as she encounters all manner of attempts on her life: marching robots, animatronic vampire dolls, a highly stimulating electric organ, a transparent bubble filled with pretty—and lethal—parakeets, and the lava-lamp-like liquid “Mathmos” which surrounds and sustains the dystopian Sogo, the city of night.

Your ticket for the: Altered States Films: Barbarella (1968)