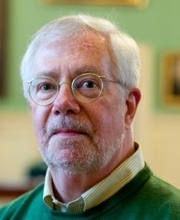 Pope Professor of the Latin Language and Literature

The poetry of Horace (65-8 BCE) was immensely popular in the Middle Ages: more than 800 manuscripts survive, of which the Houghton copy is by far the oldest in the Western hemisphere. The pages on display contain the first poem of his third book of Odes, beginning
“Odi profanum vulgus et arceo” (I detest the vulgar crowd and keep it far off). Medieval readers of classical texts were always on the alert for quotable items, particularly of a moral nature, and often marked them with the equivalent of an NB; the margin of the right-hand page contains two such stylized NOTA signs.

Your ticket for the: Richard J. Tarrant