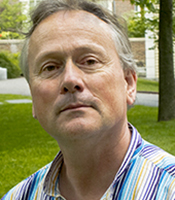 Henry B. and Anne M. Cabot Professor of English Literature

The first printed edition of the earliest woman writer in English, Julian of Norwich (1343–ca.1416), was made in London in 1670 by Serenus Cressy, a Roman Catholic convert, Benedictine monk and chaplain to Charles II’s wife, Catherine of Braganza. Cressy dedicated the work to Lady Mary Blount of Sodington, in Worcestershire, also a recent convert to Catholicism. In his dedicatory epistle, he presents Julian’s book as though it is Julian herself, urging Lady Blount to invite her into her “Closet” and “enjoy her Saint-like Conversations,” as though she were present. Unusually for this period, he also left Julian’s text in its original Middle English, rather than modernizing it, perhaps in order to make the illusion of conversation more effective. This copy was acquired for the library at Fruitlands, the agrarian commune founded by Amos Bronson Alcott and Charles Lane in the 1840s.

Your ticket for the: Nicholas Watson