Spotlight on Collections: Thoreau’s Notes on the Shipwreck of Margaret Fuller 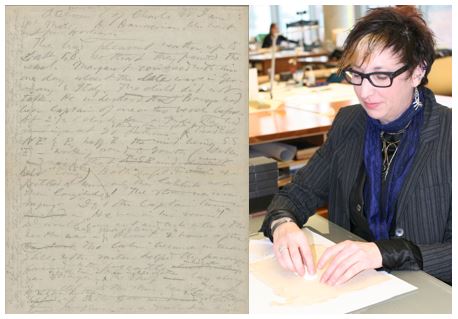 Houghton Library recently acquired Thoreau’s manuscript notes on his exhaustive but fruitless search for the bodies and belongings of war correspondent and feminist Margaret Fuller Ossoli and her family, shipwrecked off Fire Island on July 19, 1850.

Leslie Morris, Karen Walter, and Pulitzer Prize winner Megan Marshall will present behind-the-scenes perspectives on the acquisition process, the conservation treatment, and the manuscript’s value for research and teaching.

Presentations will be followed by light refreshments and an opportunity to view the Thoreau manuscript and a letter from Margaret Fuller to her father in the exhibitions Henry David Thoreau at 200 and Open House 75: Houghton Library Staff Select.

Leslie A. Morris is Curator of Modern Books and Manuscripts at Houghton Library, Harvard University, a position she has held since 2005; she was Curator of Manuscripts in the Harvard College Library from 1992-2005. She is responsible for acquisition of research materials in all languages and subjects dating from 1800 to the present, and she curates a collection that includes the papers of Ralph Waldo Emerson, Margaret Fuller, the Alcott family, Emily Dickinson, e.e. cummings, Herman Melville, John Updike, and Gore Vidal (to name a few of the American collections) and many others. Her personal research centers on the history of bookselling and book collecting in the 19th and 20th centuries.

Karen Walter is a Senior Paper Conservation Technician at Harvard University’s Weissman Preservation Center, where she has worked for close to twenty years. Her primary responsibility is for the care, housing, and conservation treatment of paper-based materials in the rare collections of Harvard Library. Examples of past treatments include the manuscripts of John Keats, Herman Melville, and Emily Dickinson. She is also a practicing artist, creating works of art on paper which she exhibits regularly.

Megan Marshall is Charles Wesley Emerson College Professor, Emerson College, as well as a graduate of Harvard/Radcliffe (’77) and a Radcliffe Institute Fellow (’07). She is the author of Margaret Fuller: A New American Life, winner of the 2014 Pulitzer Prize in Biography and Memoir and the 2014 Massachusetts Book Award in Nonfiction, and two other biographies of New England women. For the occasion of Margaret Fuller’s bicentennial in 2010, Marshall curated an exhibition of rare books, manuscripts, and artwork at the Massachusetts Historical Society titled A More Interior Revolution: Elizabeth Peabody, Margaret Fuller, and the Women of the American Renaissance.

Register for Event: Spotlight on Collections: Thoreau’s Notes on the Shipwreck of Margaret Fuller

Your ticket for the: Spotlight on Collections: Thoreau’s Notes on the Shipwreck of Margaret Fuller

Spotlight on Collections: Thoreau’s Notes on the Shipwreck of Margaret Fuller