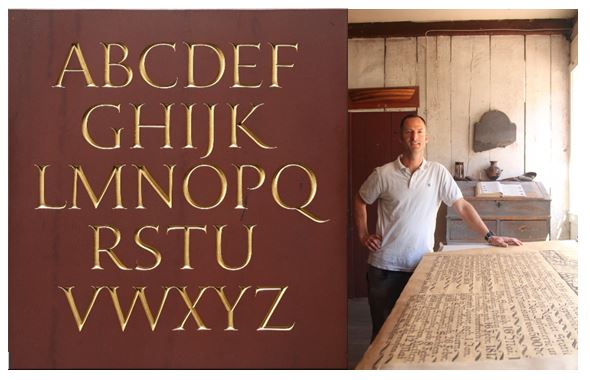 Founded in 1705, The John Stevens Shop specializes in the design and execution of one-of-a-kind inscriptions in stone. In the classical tradition, architectural and memorial lettering is generated by hand with a broad-edged brush in the manner of the great Roman inscriptions and then carved into stone with mallets and chisels, giving true sculptural form to graphic and calligraphic designs. For three centuries the shop has produced headstones for New England gravesites, and its skilled artisans have designed and inscribed calligraphy on buildings and stone monuments across the country. Recent public projects have included the lettering for the National World War II Memorial, the Martin Luther King, Jr. Memorial, and the Franklin D. Roosevelt Four Freedoms Park. Closer to home, three generations of the Benson family, proprietors of The John Stevens Shop since 1927, have carved inscriptions for Harvard University and Houghton Library.

Nicholas Waite Benson is a third-generation stone carver, calligrapher, and designer whose meticulously executed inscriptional works are noted for their uncompromising craftsmanship and beauty in form and line. In 1979 he began an apprenticeship at The John Stevens Shop at the age of fifteen with his father, John Everett Benson, following in the tradition established by his grandfather John Howard Benson. After study in the United States and Europe he returned to the shop and since 1993 has been its owner and creative director. In 2007 he was awarded a National Heritage Fellowship from the National Endowment for the Arts, and in 2010 he was the recipient of a MacArthur Fellowship.

Your ticket for the: The John Stevens Shop: Three Hundred Years of Inscriptions in Stone