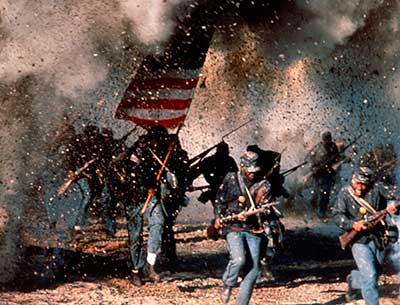 With a special introduction by Peter Accardo, Coordinator of Programs at Houghton Library.

At the crest of the Boston Common, facing the State House, is a monument to the Civil War’s 54th Massachusetts Volunteer Infantry, the first US Army unit composed entirely of African American troops, and its (white) commander, Col. Robert Gould Shaw (b. 1837). Glory tells the inspiring and intensely moving story of the formation of this unit and its combat record. While the film never fully escapes the trap of the “white savior narrative,” it also affords screen time to an extraordinary ensemble of African American actors.

Houghton Library holds the principal collection of letters (more than 200) written by Shaw, Harvard Class of 1860, to his strongly abolitionist family during his Civil War service. Shaw was appointed in March 1863 colonel of the 54th regiment of Massachusetts infantry, the first African-American unit from a Northern state to serve in the war. Shaw and more than half his regiment died in the Second Battle of Fort Wagner, July 18, 1863. Presented in 1975 by descendants of Shaw’s sister, Ellen, the collection has been a primary resource for several recent biographies of Shaw. The letters drew interest from around the world after the appearance of Glory, which includes a full-screen credit to Houghton Library.

Your ticket for the: Houghton at 75 Film Series, Harvard Film Archive: Glory (1989)